This is our final report on the primary transportation of oil. So far, we have covered rail (in September; September 2020) and pipelines (October; October 2020), which now leaves us to look at the awesome world of barges! Commercial barging in the UK is virtually non-existent and the mere mention of barges tends to generate a rather whimsical feel, evoking brightly painted and flower bedecked pleasure craft travelling at 4mph along quaint (and tiny) British waterways. Only the Thames (barges have been extensively used for the Crossrail project) and parts of Yorkshire (aggregates on the Aire & Calder navigation) carry any significant barge freight of note.

Not so in mainland Europe or North America, where barges are industrial river monsters – carrying as much as 5m litres of fuel (125 truck loads!) and sometimes even transporting “dumb” barges in convoy, increasing the already massive volumes several times over. The photo attached highlights the scale of this type of water transport, specifically showing a 3.5m litre barge (alongside a smaller grain barge), carrying product from Antwerp to the inland Belgian city of Liege. The main reason for extensive barge activity is of course geography, as the likes of the Rhine, Rhone and Danube in Europe and the mighty Mississippi in America, are all big enough and navigable enough to ensure that water transport is a dominant force in the world of logistics. 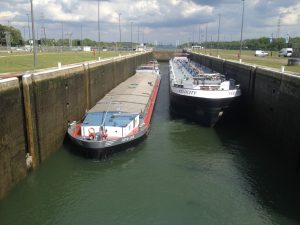 In Europe, most of the major oil barge traffic starts its life at the vast refining “hub” that is Antwerp, Rotterdam and Amsterdam (ARA). Product is carried through the Benelux countries and deep into Germany along the Rhine, where eventually the Rhine-Danube Canal (Bavaria) connects these two great European rivers. Petroleum products originating from the port of Antwerp make up over 55% of total Belgian river traffic, whilst in Holland, almost 90% of distributed petroleum products are delivered by barge – typically from Amsterdam and Rotterdam. German fuel consumption accounts for over 30% of ARA sourced oil products and contributes to a total volume of 30m tonnes (35bn litres) per annum that is transported by barge, via Germany’s 7,500km of commercial waterways.

In the States and as the soon to be departing US President would like to tell you, size matters (“look at my hands”) and nowhere is that truer than with US barging operations. Here the rivers are of a scale and length that allow for truly epic waterborne journeys. 630m tonnes of commercial freight is moved by inland waterway in the States each year (this versus 540m tonnes in Europe) and at the heart of US water transport is the mighty Mississippi river system. This makes up the bulk of America’s 40,000 km of navigable waterways and accounts for over 60% of total US river traffic. It runs all the way to the Gulf of Mexico from the Illinois Ship Canal, which itself is connected to the Great Lakes Waterway system, which in turn meets the Saint Lawrence Seaway. This basically means that a sea-going barge could (for the hell of it one assumes) do a half-lap of the North American continent, travelling north from New Orleans, up to Chicago, then Montreal and Quebec City, out into the North Atlantic by Newfoundland, down the coast past New York, around the Florida panhandle and then back to dock in New Orleans Harbour a few weeks later…

Around 100bn litres of oil products are transported each year on the Mississippi system, connecting as it does all the major US Gulf Coast refineries (New Orleans, Houston, Baton Rouge, Corpus Christi) with both the hinterland oil fields and industrial centres of the North. Crude from the oil fields travels down the river, whilst refined products travel up to northern industrial consumers. Unlike in Europe where product is moved by single units. in the USA, vessels push or pull barges that are lashed together to form a “tow” – sometimes consisting of up to 10 dumb barges. This often gives a total volume in excess of 25,000 tonnes (30m litres) in one movement!

With these examples, we once again see the innate advantage of primary transport when it comes to moving large volumes over long distances. One single Mississippi River Towbarge can carry the equivalent of 550 equivalent truck journeys or up to 10 rail journeys, at a lower cost and a fraction of the emissions generated. If the annual cargo carried on the US inland waterways had to be moved by an alternative transport mode, it would take over 6 million rail cars or 25 million trucks to carry the load. Finally, with rare “stops and starts”, no variances in speed and often helped along by the natural flow of the river, barges are also incredibly fuel efficient, as well as reducing congestion, accidents and noise in urban areas. On top of all of that, they just look cool – which is why they achieve the ultimate accolade in the Nerd’s Hall of Transportation Fame. And that accolade is that barges are most definitely Portland’s favourite form of primary transportation!

Back to Market Reports